Today I want to recommend you a book which is a psychological thriller and tells about the destructive aftermath of an online relationship. I believe this is one that book bloggers might enjoy or get frightened of because the story is between an author and his adoring fan.

THE CLOSER I GET BY PAUL BURSTON

Tom is a successful author, but he’s struggling to finish his novel. His main distraction is an online admirer, Evie, who simply won’t leave him alone.
Evie is smart, well read and unstable; she lives with her father and her social-media friendships are not only her escape, but everything she has.

When she’s hit with a restraining order, her world is turned upside down, and Tom is free to live his life again, to concentrate on writing.

But things aren’t really adding up. For Tom is distracted but also addicted to his online relationships, and when they take a darker, more menacing turn, he feels powerless to change things. Because maybe he needs Evie more than he’s letting on.

The Closer I Get by Paul Burston is published by Orenda Books; ebook on 11 May 2019, followed by the paperback release on 11 July 2019.  My thanks to the publisher who sent my copy for review.

ADD IT TO GOODREADS

The Closer I Get by Paul by Paul Burston is a unsettling story about one’s online presence and one’s obsession with it. As a blogger, the online world is somewhat a second home to us all. It’s where we present our best selves to build our platforms and our security. It’s unavoidable to the work we do, that we sometimes forget what is real and what is the internet. Follower counts and shares sway our perception of our self-worth to a point that it can affect our personal relationships.

Tom Hunter is one such person who relies on a social presence to market his books and to build a following. Just like his namesake, Tom is a hunter in the online world, unconsciously searching for anyone who would hear him. So often, we don’t think much about the words we send out in tweets, at times never caring much that our words would be lost in a sea of other tweets. But when someone begins to pay attention and actually replies back, we feel validated. Especially if it is from someone who claims to deeply admire us.

In The Closer I Get, Paul Burston examines the relationship between an author and his fan. In the beginning, the author entertains this loyal fan who constantly stands up for him, whether it be against negative reviews or hater, Evie Stokes has always been there for her favourite author. What is obssession is mistaken for loyalty. However, this is not just a book about a toxic relationship but rather, the disillusionment that comes from online behaviour.

When their supposed relationship turns sour, Evie Stokes finds herself being taken to court for stalking and harassment. Evie, to me, was a fascinatingly dark character. In spite of being labelled as a “crazy fan,” Evie had never seen an wrong in what she had done. To her, everything she did was for Tom Hunter, her favourite author. The eartnessnes of her initial confusion and then the subsequent anger made me pity Evie one moment and then dislike her the next. It was unsettling to read from her perspective because every small gesture, every coincidence was blown up into something that held deeper meaning for Evie.

But all Tom wants is to finish his book and be the successful author he once was. However the harassment he face from Evie leads him into spiraling depression and anxiety. We, as the reader, are taken in by Tom’s story. Yet even as we continue on there is a darker tone to the book. Something is not right. Tom’s story is filled with holes and details that sometimes contradict each other. As we come to know Tom, you realize that he is a narcissist and selfish person. Even as he speaks out against Evie, you see that there is a part of him that craves the attention and “loyalty” she had given him. But how far has Tom gone to influence that?

The Closer I Get is told from the perspective of two unreliable narrators. The chapters alternate between Tom who talks about the after effects of the harassment and his attempts at balancing his life, and Evie who narrates in the first person. Unlike Tom, Evie spills it at all. Yet even when all her secrets are bare it is too twisted to tangle out. I love the play of perspective and the ominous structure with which Paul Burston writes. The characters are crafters at storytelling, are cunning and manipulative, and there are boundaries they willingly cross to preserve their “ideal” self.

In October 2018, The Bookseller announced that he had signed a two book deal with Orenda Books. The first, a social media psychological thriller called ‘The Closer I Get’, will be published on July 11, 2019.

Paul Burston is also host of London’s award-winning LGBT literary salon, Polari, at the Southbank Centre, and founder of The Polari First Book Prize for LGBT-themed work. For more info go to www.polarisalon.com

In March 2016 he was featured in the British Council’s FiveFilms4Freedom Global List, celebrating “visionary people who are promoting freedom, equality and LGBT rights around the world.” 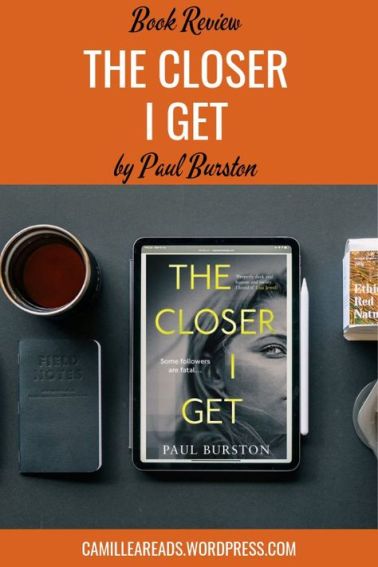 I received a free copy of THE CLOSER I GET BY PAUL BURSTON from the publisher, Orenda Books, in exchange for my participation in the blog tour. Thank you to the Anne Cater from Random Things Blog Tours and Orenda Books for sending a copy my way. However, this did not influence my review in any way.

8 thoughts on “THE CLOSER I GET BY PAUL BURSTON: A TALE OF OBSESSION THAT IS TERRIFYING YET IMAGINABLE”