Happy End of April, my friends! As I write this I’m sitting in the coolest part of my house in hopes of escaping the sweltering heat that is summer. April has been both hectic and a fun month for me. In fact, I have a little surprise announcement at the end of this post, so let’s get to it!

🌺 I haven’t been posting as much on the blog as I would have liked. The lack of WiFi at my apartment has affected my blogging work, so I’m trying to set up a system where I set time aside to research at work, write my posts out at home, and then post them either during my work break or at an Internet cafe. Does anyone else have a problem like this?

🌺 I’ve been participating in Year of the Asian Reading Challenge – which I’ve been failing to update – but as of April, I’ve read a total of five books and seven manga volumes. So I’m hoping that this means I’ve surpassed my initial level of the Philippine Tarsier and I have no entered the Indian Cobra level!

🌺 Are you curious about what makes a book an instead pick up for me? In my post, Bait a Bookworm! I share the top ten things which make me pick up a book.

🌺 I talk about how I built up my little library in Books, Shelves, and All The Ways My Library Was Built!

🌺 Charvi from Not Just Fiction created a new discussion which I’ve joined in. The first prompt I wrote on is My Thoughts on Organizing Bookshelves.

🌺 I also want to share with you a heavily emotional book I read this month. All We Could Have Been by T.E. Carter explores PTSD in the aftermath of a family crime. I gave this book four stars on Goodreads and wrote, “I was completely mesmerized by Carter’s prose which seemed to jump out of the pages. There is so much to unfold in this story beginning with Lexi’s PTSD to people and what it means to hope.”

THE WATERMIGHT THIEF BY JORDAN RIVET: ⭐⭐⭐⭐⭐

HOW WAS MY MONTH?

I’m a little late with announcing this but…

YES, YES, YES! I got engaged, you guys! I wasn’t sure whether it was the right thing to announce it on here buuuuut I couldn’t just not tell you! This blog and my readers is a big part of my life, so I wanted to share this moment with you as well.

🌺 I presented my research paper at a conference last week. It was my first time talking about my study in public, aaaaah! I was so happy because last year although I had my paper accepted at a big conference I was unable to attend due to finances. So, I was overjoyed to find a nearby event. My paper is on the Family Dynamics of India-Filipino Families; it’s a study that’s very close to my heart, so I was a bit terrified but excited to have the opportunity to talk about it.

🌺 I know I don’t share much about cinema here but for those who love animation I want to recommend you watch Big Fish and Begonia. I cried my heart out watching this movie. Not only is the animation mouth dropping gorgeous but the storyline was very heart warming. It’s on Netflix, so do check it out and let me know what you think! 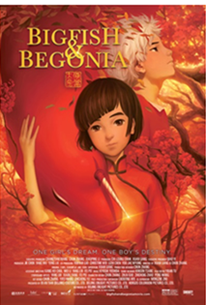 🌺 I also binge watched Mob Psycho 100! It was such a fun anime, especially since I was missing One Punch Man. Mob Psycho 100 is about a middle school boy who has powerful psychic powers. However, he has live his life isolated from his schoolmates and is under the tutelage of a con-man. It’s one of those shows that is just wholesome and fun to watch with friends.

🌺 Having read through and self-reviewed the first draft of my novel Ghoul WIP, I’m now writing its second draft. As I work through it I’ll be looking for a critique partner who can help me be accountable and also someone I can talk to about writerly works.

🌺 Malka and Chana from Paper Procrastinators share their own takes on whether they DNF or don’t DNF books.

🌺 Charvi @ Not Just Fiction celebrates her one year anniversary with a Q&A! Please head on over to their blog because I am absolutely sure you’re going to love their work!

🌺 Vicky @ Vicky Who Reads gives us a splendid and easy tutorial on adapting book covers into horizontal header.

🌺 Kristi @ YA and Wine shares some advice on building a platform in the book community which you can read alongside Beth @ Books Nest’s post on How to Get Visitors to Your Blog.

🌺 Meeghan @ Meeghan Reads wrote a hilarious discussion on the “prophecised one” trope and whether it’s really all it’s cracked up to be!

🌺 Kaleena @ Reader Voracious talks about why they’ve done away with star ratings for their book reviews.

🌺 Dani @ Perspective of a Writer shares some advice on how we can bookstagram without getting discouraged.

How do you work with your blog when there is a lack of WiFi?

What movies did you watch last month?

Have you joined any reading challenges?

What’s your favourite read from April?

34 thoughts on “APRIL WRAP UP: SURPASSING MY LEVEL FOR YARC 2019! MOVIE RECOMMENDATIONS! AND A SURPRISE!”