Today, I’m so excited to be interviewing M.L. Wang, the 2019 winner of the Self Published Fantasy Blog-Off! I had the chance to read and review M.L. Wang’s The Sword of Kaigen last year. The self-published military fantasy book completely amazed me! You can read more about my thoughts on my review: THE SWORD OF KAIGEN BY M.L. WANG: A JAPANESE INSPIRED MILITARY FANTASY ON TRAGEDY, LOSS, AND FAMILY.

Now on to the interview!

Please introduce yourself to our readers and tell us a little bit about your work.

Hi, I’m M. L. Wang, personality in flux. In the miasma of change, the constant is writing. I’m always writing some mix of sci-fi and fantasy that helps me process reality. My most recent release, The Sword of Kaigen, is a Japanese-inspired military fantasy with ice-elemental magic.

My books have always been a way for me to work out my emotional issues. This one was just a (frankly overdue) projection of my adult issues instead of my teenage ones.

I was really impressed by the character development Misaki had in the series. As a writer, what are some things to keep in mind when developing characters?

Writing advice is always tough, because everyone’s brain is so different. The best character building advice I can give from my strange brain, with a heaping tablespoon of salt, is build from the inside out.

I prefer to develop a character’s internal mechanisms (i.e. wants, motivation, psychology) before investing in external facets (i.e. outfit, hairstyle, speech patterns). To achieve this internal sense of a character, I write test-run scenes to get me inside a character’s head before starting in on the events in my outline. The test-runs that have served me best are the three ‘D’s:

THE DAY AT WORK

Take your character through a day of doing what they do best—be it baking, espionage, party planning, conflict moderation, arson, sports, whatever. What is their process? How do they feel about what they’re doing? Do they take pride in it? Shame? Satisfaction? Walk through it with them and figure it out.

Drop your character into an argument with someone who questions their views and/or way of life. For maximum effectiveness, the detractor must be your character’s intellectual equal or superior. No easily dismantled straw men allowed! This is the quickest way to figure out not only the finer points of your character’s ideology but also how they deal with conflict. How secure are they in their views? How willing to defer to authority? Are they aggressive in argument? Calm? Snide? Do they project? Are they quick to question themself? Willing to question themself at all? How articulate are they? Do they stay that articulate when frustrated?

THE DRAGON
(by ‘dragon’ here, I just mean a monstrous antagonistic force that might appear at the climax of any story. Honestly, I just wanted to preserve the alliteration)

Put your character in a high stress, high stakes situation— dangle them off a cliff, dump them the day before prom, drop a car on their family—and let them deal with it. This scenario can be lifted from a potential climax of your story or from somewhere else, like the Titanic, the Hunger Games, or a sitcom, whatever kind of pressure feels relevant to the questions you’re trying to answer about the character. I usually attempt my planned action climax early in the character development process, so I can figure out where the holes are.

(Most of the climactic fight scenes in The Sword of Kaigen were written multiple times as I got to know the characters better.)

For this book you told the story from two different points of view, did you face any difficulty shifting from the mind of a fourteen-year-old to that of an adult?

I don’t think I’ve ever written a book entirely from one point of view, so shifting between the two came naturally. Mamoru, my good, earnest boy, is a simpler character than most of my YA protagonists, so there wasn’t much trouble with him. Most of the difficult work came with Misaki’s storyline.

Photo by Camillea on Camillea Reads

One of the central themes of The Sword of Kaigen is the abuse of power and propaganda instigated by the government. Could you give us some insight into the research you had to do for this plot arc?

Propaganda has been a point of fascination for me since I was a little kid, growing up in a multicultural household and community. American media and Chinese media tell vastly different stories about the way the world is and how it got to be that way. Growing up with this dissonance forced the revelation that most of our ‘histories’ are myths a culture tells itself about itself.

The way propaganda works in The Sword of Kaigen is directly inspired by my experience of the way certain knowledge can be reinvented or disappear entirely within a generation, how war crimes, sacrifices, and alliances can be buried by a culture with a vested interest in burying them.

When I went to school in Japan, the kids my age didn’t know about the Nanjing Massacre. Despite the fact that their own grandparents likely knew about it and—though it’s not a fun thing to think about—may have participated, this is not part of the story modern Japan is interested in telling about itself. Similarly, there is so much Chinese history that modern China scrubs from the mouths of the old and the minds of the young. (Countries without stringent censorship, like the US, disseminate propaganda in totally different ways, but that’s a discussion for another day).

It varies from one month to the next, sometimes regimented, sometimes random. Life was a mess when I wrote The Sword of Kaigen. For my current project, I have a spreadsheet with a daily word count goal, make-up goals, stretch goals, and a prospective project end date. Organization is nice as long as it lasts, but every project ends with unscheduled hysterical tinkering.

Which books are on your nightstand?

Being a lousy reader, I consume books almost exclusively through Audible. The audiobooks I’ve enjoyed most recently: Gideon the Ninth by Tamsyn Muir, The Midnight Lie by Marie Rutkoski, and The Grace of Kings by Ken Liu. The books that are physically on my table right now are Waterlily by Ella Deloria and The Heart of the Ngoni by Harold Courlander and Ousmane Sissoko—both re-reads from college, both excellent.

What are some future projects to expect from you?

Since discontinuing my previous universe, I’m playing with a few new fantasy projects. The one that will likely be finished first is a loosely Mulan-inspired flintlock fantasy with a calligraphy-based magic system and an f/f enemies-to-lovers romance. Oh, and magic archeology. It’s a lot to pull together, but that’s part of the fun. 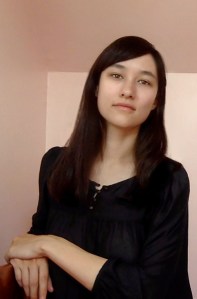 M. L. Wang was born in Wisconsin in 1992, decided she wanted to be an author at the age of nine, and never grew up. She got her Bachelor of Arts in history in 2015 and currently works at a martial arts school in her home city of Madison.

When she isn’t building worlds on the page, she builds them in her aquarium full of small, smart fish that love to explore castles and don’t make noise during writing time.

🌺 Have you read The Sword of Kaigen?

🌺 Do you enjoy reading books with multiple POVs?

🌺 What book is on your nightstand?

4 thoughts on “AUTHOR INTERVIEW WITH M.L. WANG // ON STORYTELLING THEMES AND CHARACTER DEVELOPMENT”