Firstly, I want to apologize for being very late with my review but a big thank you to the tour hosts at The Fantastic Flying Book Club for being understanding. So, now that I’m better I’m super excited to introduce you to the standalone companion of Isle of Blood and Stone! Song of the Abyss by Makiia Lucier follows a young mapmaker on a journey to rescue her vanished shipmen. So, if you’ve read the first book, I highly recommend picking up Song of the Abyss which features a favorite character from book one.

SONG OF THE ABYSS BY MAKIIA LUCIER

BOOK TWO OF TOWER OF WINDS 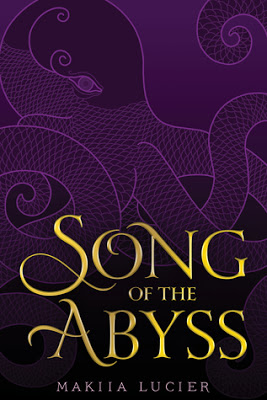 Ancient grievances, long-held grudges, and dangerous magic combine in this sweeping standalone fantasy perfect for fans of Tamora Pierce and Rachel Hartman.
They came in the night as she dreamt, in her berth, on a ship sailing home to del Mar. After, they would be all Reyna thought about: two carracks painted scorpion black. No emblem on either forecastle, no pennants flying above the mainmasts to hint at a kingdom of origin.
Never a good sign.
As the granddaughter of a famed navigator, seventeen-year-old Reyna has always lived life on her own terms, despite those who say a girl could never be an explorer for the royal house of St. John del Mar. She is determined to prove them wrong, and as she returns home after a year-long expedition, she knows her dream is within reach. No longer an apprentice, instead: Reyna, Master Explorer.
But when menacing raiders attack her ship, those dreams are pushed aside. Reyna’s escape is both desperate and dangerous, and when next she sees her ship, a mystery rises from the deep. The sailors–her captain, her countrymen–have vanished. To find them, Reyna must use every resource at her disposal . . . including placing her trust in a handsome prince from a rival kingdom.
Together they uncover a disturbing truth. The attack was no isolated incident. Troubling signs point to a shadowy kingdom in the north, and for once, the rulers of the Sea of Magdalen agree: something must be done. But can Reyna be brave enough to find a way?

🌺 Related Post: Book Review of Isle of Blood and Stone by Makiia Lucier

Song of the Abyss can be read on its own although I found that reading book one helped enrich the characters a lot more. Our main character, Reyna, who was only nine years old in book one, is now an apprentice mapmaker. Sadly, this book presents yet another world where women are not given as many opportunities and are consistently looked down by society. Personally, I’m tired of reading fantasy worlds which incorporate this system as a means to show their female characters are badass for going against it but that can be a discussion for another day. Song of the Abyss had many strong female characters like Reyna who crossed seas to save her friends, like Blaise who stood up to her family to chase her ambition, and even Tori-si who put herself first before any law.

Makiia Lucier’s writing style remains beautiful and descriptive. I especially loved her description of the maps in Song of the Abyss, and the way she presented the foreign culture of Miramar.  The pacing of the book gave the plot time to peel back the mystery of Miramar and its inhabitants. She writes in a very simple manner, never falling into purple prose to incite fascination from her readers. For some, this may not be good as the book does start off on high action and the slows down considerably. For me, it worked because I do enjoy slower-paced novels and in this case, it worked well because it gave readers the time to know the vanished men. It reels us in, emotionally.

However, plot-wise, the book lacked high stakes. Of course, there are the vanished men but I didn’t find there was enough challenge to raise the stakes towards the end. I guess what I was looking for were obstacles that were more than just miscommunication between our romantic partners.

Speaking of which, although an enemy to lovers trope played out in Song of the Abyss I didn’t find myself particularly into it. Reyna and Levi are definitely cute together but I’ll admit that I was bit put off by Levi’s jealousy. If the guy had seriously just been upfront with Reyna, that would have worked way better for the story. Also, I don’t think he had any right to be all weird about it when he had only met Reyna. But I’ll admit their softness for each other was just precious. I have a weak spot for soft male characters.

Overall, Song of the Abyss was a wonderful read rich in history and having a mapmaker as the protagonist gave this fantasy read a new perspective. You certainly don’t need to read Isle of Blood and Stone to get into this book, but if you do get the chance I would certain recommend reading the entire duology!

Makiia is the author of historical fiction and historical fantasy for young adults. She grew up on the Pacific Island of Guam (not too far from the equator), and has degrees in journalism and library science from the University of Oregon and the University of Wisconsin-Milwaukee.
Her debut novel, A Death-Struck Year, was called a “powerful and disturbing reading experience” by Publishers Weekly, and was a finalist for Germany’s top book prize for children, the Deutscher Jugendliteraturpreis. Her second novel, Isle of Blood and Stone, was inspired by her love of Indiana Jones movies and old, old maps.
She lives with her family in North Carolina.

I received a free copy of SONG OF THE ABYSS BY MAKIIA LUCIER from HMH BOOKS in exchange for my participation in the blog tour. Thank you to the author, The Fantastic Flying Book Club and  HMH Books for Young Readers for sending a copy my way. However, this did not influence my review in any way.

Follow the tour reviews on The Fantastic Flying Book Club