When I read a book with Asian characters, I still find that I have trouble relating because although these characters were Asian, their experiences differed greatly from the Filipino experience. So reading about these characters, while making me happy, still felt like watching events happen from afar.

But with its first line of Patron Saints of Nothing captured the essence of my mornings here in the Philippines.

It was a day of soil, sunlight, and smoke.

It was a beautiful experience to read a book that knows the Philippines and its people completely; to be able to read about my self without any stereotypes or judgment was freeing. Yet while I loved this book, the saddest part about Patron Saints of Nothing is that it is not a fictional book I can cry over, close, and then leave on my shelf. It is mine and my people’s reality. Every character in the books is a person we know in real life.

Jun’s death was not just words on a page.

PATRON SAINTS OF NOTHING BY RANDY RIBAY 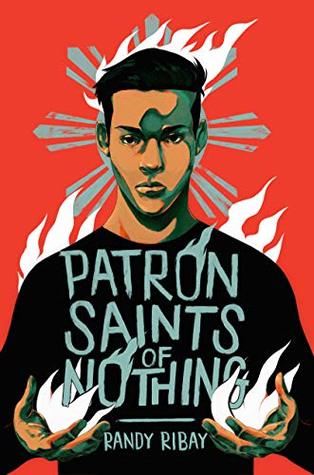 A powerful coming-of-age story about grief, guilt, and the risks a Filipino-American teenager takes to uncover the truth about his cousin’s murder.

Jay Reguero plans to spend the last semester of his senior year playing video games before heading to the University of Michigan in the fall. But when he discovers that his Filipino cousin Jun was murdered as part of President Duterte’s war on drugs, and no one in the family wants to talk about what happened, Jay travels to the Philippines to find out the real story.

Hoping to uncover more about Jun and the events that led to his death, Jay is forced to reckon with the many sides of his cousin before he can face the whole horrible truth — and the part he played in it.

As gripping as it is lyrical, Patron Saints of Nothing is a page-turning portrayal of the struggle to reconcile faith, family, and immigrant identity.

It was this theme of the novel that emotionally unwound me. Here is the truth: I have never felt at home in my countries. I’m always seen as one half of the other, never truly Filipino, never truly Indian. It may seem like a trivial thing compared to things happening in the book but Jay’s immigrant experience tells us a lot about the Filipino diaspora.

In the novel, Jay’s family dislikes his father because his leaving them was a betrayal.  Jay’s father moved to the US to give a better life for his children but to his family, he was selfish. It’s not uncommon for me to hear my friends talk about going abroad – not for the pleasure of travel – but for the purpose of earning enough to feed and keep their family content. People sacrifice years and years of being with family to be able to sustain a lifestyle for their children. Every year our airports are filled with overseas Filipino workers and the balikbayan boxes.

Every year forgiveness is sought.

This was the most heartbreaking thing to read about in the novel because I have witnessed the sacrifices my parents have made not only to support their children but to also help their families.

Jay returns to the Philippines with the hopes of finding out the truth about Jun’s death. So from the beginning of the book, the story is colored by an immigrant’s perspective and assumptions of the Philippines. This isn’t to say that Jay isn’t Filipino at all, but being away from his country had him idealizing the country beyond recognition.

Not only does Jay have to deal with a culture he’s not familiar with but he’s also constantly reminded about how he is not Filipino enough. Jun’s death is the tipping point that has Jay confronting what it means to be Filipino and American. His struggle with his identity is in essence similar to his relationship with Jun – he regrets the silence, the distance, he regrets not trying enough. Jay grapples with how much of the Philippines is his own and if he is Filipino enough to claim it.

Moving back to the Philippines was an eye-opener for Jay. We find how differently the Filipino values of family and respect differ from that of America. Jay has to navigate this new culture all by himself, everything he had learned had to be re-learned. This was another aspect of life that I related to so much.

The nervousness of assimilating to a culture that should already be familiar to you is painful. It is taking a step forward only to realize how much more you do not know. Jay doubted himself a lot throughout the novel. As a biracial I’ve always wondered if I had any right over the Philippines or India’s history; my identity was eschewed because I felt each ethnicity was closed off to me. So we filled ourselves with the shallow things; the things that were on the surface and easy to catch but in doing so I found that I had strayed far from my country.

Randy Ribay writes on the political tension, the drug war, ethnicity and history, the propaganda, to make this coming of age story powerful. At the heart of the story, Patron Saints of Nothing, through Jay, asks the question: what is the truth?

Or better yet, are you willing to fight for the truth?

To be honest, I wish I didn’t have to read this. Every single day my heart breaks for the losses. Every day I live in fear of being the next person to be gunned down. A part of me didn’t want this to be the thing my country would be known by.

Even as I write this, I hold back tears and my hands tremble.

We have lost thousands, and still, continue to.

If you have something to say, you should say it. If you are to figure things out, you can’t hide from them. Silence will not save you.

Jun’s arc in Patron Saints is our reality. Just like Jay, I continued to hope for Jun’s innocence which reveals my own discrimination. Randy Ribay’s book truly unearths the discrimination in our beliefs.

In the end, the book asks us who, then, is worthy of justice?

What makes someone worthy of justice?

Emotionally, Patron Saints of Nothing was a sledgehammer. Nostalgia, anger, and grief swirled within its pages. It was hard to put down and even harder to move out of. This is a book I would ask every child and adult to pick so that they would understand the life of the Filipinos under our current regime.

I loved Grace‘s character in the book; she was stubborn and in spite of her father’s iron fist, Grace knew what was right and wrong. Her love for her brother and sister are filled with longing and much grief. Her resilience to continue Jun’s work was both heartbreaking and inspiring. It showed us that though we are scared, even in the quiet we can take action!

Tito Maning was a despicable character and yet, he was also complex. His hatred for the colonizers is very palpable. He full heartedly supports Duterte and his drug war, and yet he did everything he could to protect his family. His dislike for Jun’s father is not only motivated by a feeling of betrayal but also he believed that Jun’s father turned his back on his character. He constantly belittled Jay’s lack of knowledge on the Philippines culture and history.

Tita Chato and Tita Ines were the lovely lesbian couple who ran an organization that helps girls get out of prostitution and trafficking. I loved their characters! They were super sweet and helpful, and their fondness of Jun was so telling. Ugh, I wish I could have read something on that!

As much as I loved the book, there were some parts of the story-line though that I have to critique. The way the relationship between Jay and Mia was written at the end made me feel uncomfortable. I do not like reading about grey area cheating, so that really bothered me.

While I wish the book had been longer if only to delve deeper into the cultural complexities, and the drug war. I know in my heart that this book is for the Filipinos. We are not obligated to explain every detail of our story but we certainly have our voices. It was so heartwarming to finally hold a book and say, “Yes, this is me!” This is who I am! These are my people! This is my culture!

Patron Saints of Nothing is a journey of identity, belonging, and the truth. This is a story that is unfamiliar, almost unknown to the world. I hope this book will teach its readers that inaction and silence are just as cruel.

For what else do we owe the world but the truth?

Truth is a hungry thing.

Randy Ribay is the author of the contemporary YA novels PATRON SAINTS OF NOTHING (Kokila/Penguin 2019), AFTER THE SHOT DROPS (Houghton Mifflin Harcourt, 2018) and AN INFINITE NUMBER OF PARALLEL UNIVERSES (Merit Press/Simon & Schuster, 2015). He’s also a high school English teacher, reader, gamer, watcher of great TV, husband, and father of two dog-children. He can probably be found somewhere making lightsaber sound effects with his mouth.

Thank you for reading my review. I hope you will choose to pick up Patron Saints of Nothing and lend your voice against the brutality in our country.

Thank you to Penguin Random House Global and JM Cabraal from Book Freaks Revelations for hosting the Patron Saints PH Tour. I received a free copy for my participation in this tour, however, that did not influence my review in any way. I also highly urge you to read every blogger’s review of the book, as my experience might not be similar to their. You can find the blog tour schedule on JM’s blog!

Do you plan on reading Patron Saints of Nothing? What books with similar themes would recommend me?

11 thoughts on “PATRON SAINTS OF NOTHING BY RANDY RIBAY: A SOUL-SEARING STORY OF LONGING, REGRET, AND IDENTITY IN A HOME THAT IS STRANGE AND YET FAMILIAR”