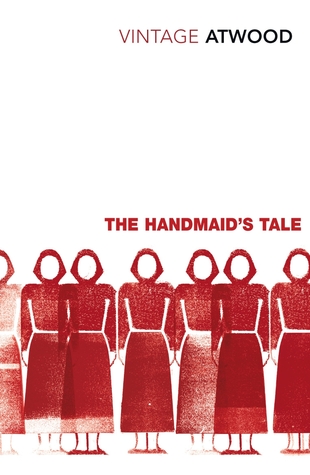 “My self is a thing I must now compose, as one composes a speech. What I must present is a made thing, not something born.”

Offred is a “Handmaid” in the Republic of Gilead. She has only one function: to breed. If she deviates, she will, like dissenters, be hanged at the wall or sent out to die slowly of radiation sickness.
Brilliantly conceived and executed, this powerful evocation of twenty-first century America explores a world in which oppression of women, and repression of the truth, have become justified.

Atwood’s dystopian world in The Handmaid’s Tale is one of the most disturbing I’ve read. It toes the line between 1984 by George Orwell and Stanley Kubrick’s adaptation of A Clockwork Orange. The creepiest thing about reading The Handmaid’s Tale was the disconnection between our narrator and their emotions. Throughout the novel Offred’s voice remained almost impassive, save for her lingering despair.

We are introduced to a world where women’s rights are null. Offred is one of the few who still remember the time before their current “regime,” before women were defined by their fertility. This dystopian world did not feel so fictional to me. Coming from a country where the Christian Church influences our government policies, Atwood’s novel is a scream to the current situation of women’s health, freedom, and independence. A “woman’s world”, indeed.

What made me uncomfortable the most were the Aunts – the women who governed The Handmaids with misled religious beliefs, their depiction feeling almost like a satire. If I had to compare them, I would say the Aunts resemble the faux-feminists. Women who claim to believe in women’s rights as long as it is does not impede on their idea of a “decent” women. How many Aunts have I known who I didn’t even give a second thought to? Their presence in the book is a forewarning, a caution, you could even say.

While I did enjoy reading The Handmaid’s Tale, the world was not one that instilled fear in me. I don’t know if it’s perhaps to with my gender or simply because we are on the cusp of Atwood’s Republic of Gilead. Margaret Atwood’s writing is beautiful. Though her characters remained faceless, her depiction of emotions was just…so full. Deadpan as the voice was, Atwood’s writing filled it with longing and in some places, a sharp-edged honesty.

Do you enjoy reading Dystopia fiction? Which book is your favourite?

You can find the rest of the books on my Classics List here.