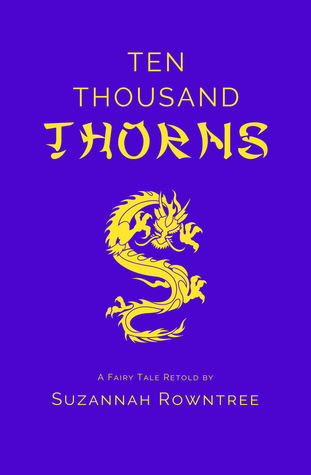 Better to be a broken piece of jade than an unharmed brick. Better to die with honour than live in shame.

To be published on November 30 2017 by Bocfodder Press

Princess Morning Light meditates in a hidden temple surrounded by ten thousand thorns. Guardian of a long-lost sword skill, the princess is destined to wake after a hundred years to return justice to the world.

Or so legend says.

As the Vastly Martial Emperor extends his brutal domination, rebel leader Clouded Sky flees the capital for the safety of his martial sect at Wudang Mountain. Meanwhile, a renegade martial artist seeks a hero to awaken Morning Light. As bounty hunters and imperial guards close in, Clouded Sky must determine who he can trust – and who may be planning to betray him.

Fairytale retellings can be one of the trickiest to write about; still, a lot of authors find inspiration from these stories and rewrite them from a new perspective. To me, it’s not about how true to the original fairytale the story should stay but the ability of the author to flesh out beloved characters and twist the fairytale into a story that will leave readers knowing more about the characters’ backstories, their motives, and their downfalls.

What made Ten Thousand Thorns stand out for me was the involvement of Chinese martial arts in this retold kingdom. It took the entire fairytale in a whole new and refreshing direction!

Iron Maiden is such an admirable character. Her dedication and loyalty to the princess won me over! I’m so glad the author gave a heroine a more active role in this story rather than allowing Sleeping Beauty to simply remain the only female, and asleep at that!

Then, we have our hero who is the complete opposite of a Prince Charming. Sure, he was a deadly martial artist but next to Iron Maiden, Clouded Sky seemed like a novice. In fact, he had no desire to wake up a presumed mythical person. Our hero was filled with self doubt, was downtrodden, and reluctant. Unlike the princes I grew up reading whose only goal was love and saving the princess, Clouded Sky had a more personal stake in the quest.

The antagonists, Imperial Sword and Second Brother were just as interesting with much more to lose in their own quest for Princess Morning Light. It’s unfortunate, though, that the author didn’t dwell more on how they came to serve the Emperor and their own backgrounds as martial artists.

With Ten Thousand Thorns, the author gave us enough to understand and follow the story but I think readers would have benefited with understanding the war. The author glossed over them from time to time but what I wanted as a reader was the working of its politics and how the normal citizens were affected. While the Asian influence in the story was distinguishable, I would have liked to have read more of the culture beyond the martial arts.

I found Ten Thousand Thorns to be a very enjoyable read that gave a unique take to the Sleeping Beauty tale. Suzannah Rowntree’s language stays true to the fairytale prose I’ve grown up with. Her prose was creative, and rhythmic making her a writer to look up to.

Purchase an ebook or physical copy from Amazon

What are your thoughts on fairytale retellings? Do you have a favourite? Is there a fairytale you’d like to see written about?

I received a free copy of this book from the author in exchange for an honest review. However, all opinions of the book is my own.